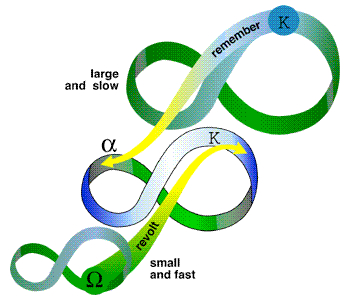 No system can be understood or managed by focusing on it at a single scale. All systems (and SESs especially) exist and function at multiple scales of space, time and social organization, and the interactions across scales are fundamentally important in determining the dynamics of the system at any particular focal scale. This interacting set of hierarchically structured scales has been termed a "panarchy" (Gunderson and Holling 2003).

Panarchy is a framework of nature's rules, hinted at by the name of the Greek god of nature- Pan - whose persona also evokes an image of unpredictable change. Since the essential focus of Panarchy is to rationalize the interplay between change and persistence, between the predictable and unpredictable, Holling et al. (2002) draw on the notion of hierarchies of influences between embedded scales, that is pan-archies, to represent structures that sustain experiments, test its results and allow adaptive evolution.

The panarchy framework connects adaptive cycles in a nested hierarchy. There are potentially multiple connections between phases of the adaptive cycle at one level and phases at another level. Two significant connections are labeled 'revolt' and 'remember'. The smaller, faster, nested levels invent, experiment and test, while the larger, slower levels stabilize and conserve accumulated memory of system dynamics. In this way, the slower and larger levels set the conditions within which faster and smaller ones function. Thus a forest stand moderates the climate within the stand to narrow the range of temperature variation that the species experience. But missing in this representation, is the dynamic of each level which is organized in the four phase cycle of birth, growth and maturation, death and renewal. That cycle is the engine that periodically generates the variability and novelty upon which experimentation depends. As a consequence of the periodic, but transient phases of destruction (omega stage) and reorganization (alpha stage), a system's structure and processes can be reorganized. This reshuffling allows for the establishment of new system configurations and opportunities for the incorporation of exotic and entirely novel entrants into the system. The adaptive cycle explicitly introduces mutations and rearrangements as a periodic process within each hierarchical level in a way that partially isolates the resulting experiments, reducing the risk to the integrity of the whole structure.

In addition to this creative role, Pan has a destabilizing role that is captured in the word panic, directly derived from one facet of his paradoxical personality. His attributes are described in ways that resonate with the attributes of the four phase adaptive cycle; as the creative and motive power of universal nature, the controller and arranger of the four elements- earth, water, air and fire (or perhaps, of K, alpha, r and omega!). He therefore represents the inherent features of the synthesis that has emerged in this comparison of ecological and social systems.