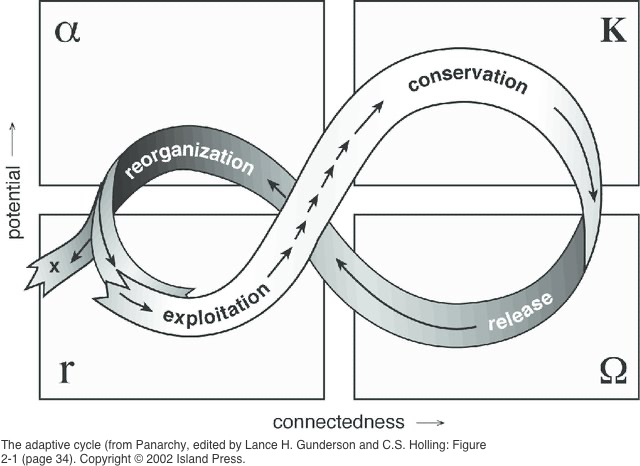 The model of the adaptive cycle was derived from the comparative study of the dynamics of ecosystems. It is meant to be a tool for thought. It focuses attention upon processes of destruction and reorganization, which are often neglected in favor of growth and conservation. Including these processes provides a more complete view of system dynamics that links together system organization, resilience, and dynamics.

Our current understanding of ecological dynamics however indicates that two additional functions - release and reorganization - are needed.

An adaptive cycle that alternates between long periods of aggregation and transformation of resources and shorter periods that create opportunities for innovation, is proposed as a fundamental unit for understanding complex systems from cells to ecosystems to societies.

For ecosystem and social-ecological system dynamics that can be represented by an adaptive cycle, four distinct phases have been identified:

The adaptive cycle exhibits two major phases (or transitions). The first, often referred to as the foreloop, from r to K, is the slow, incremental phase of growth and accumulation. The second, referred to as the backloop, from Omega to Alpha, is the rapid phase of reorganization leading to renewal.

During the slow sequence from exploitation to conservation, connectedness and stability increase and a capital of nutrients and biomass (in ecosystems) is slowly accumulated and sequestered. Competitive processes lead to a few species becoming dominant, with diversity retained in residual pockets preserved in a patchy landscape. While the accumulated capital is sequestered for the growing, maturing ecosystem, it also represents a gradual increase in the potential for other kinds of ecosystems and futures. For an economic or social system, the accumulating potential could as well be from the skills, networks of human relationships, and mutual trust that are incrementally developed and tested during the progression from r to K. Those also represent a potential developed and used in one setting, that could be available in transformed ones.

Adaptive cycles are nested in a hierarchy across time and space which helps explain how adaptive systems can, for brief moments, generate novel recombinations that are tested during longer periods of capital accumulation and storage. These windows of experimentation open briefly, but the results do not trigger cascading instabilities of the whole because of the stabilizing nature of nested hierarchies. In essence, larger and slower components of the hierarchy provide the memory of the past and of the distant to allow recovery of smaller and faster adaptive cycles. A nested hierarchy of adaptive cycles represents a panarchy.