Filmed in Cambridge Bay, Nunavut, "Hivunikhavut - Our Future" shows how participatory scenarios developed with local residents can be used to explore future change.

As part of her Ph.D. research at McGill University, Marianne Falardeau produced a short film based on her work in the Kitimeot region of Canada's Arctic. Titled "Hivunikhavut - Our Future", the film presents a participatory scenario project that explored the future of the Kitikmeot Marine Region of Nunavut by 2050. Along with her colleagues Ciara Raudsepp-Hearne and Elena Bennett, Marianne designed and facilitated a participatory scenario exercise in Cambridge Bay, Nunavut in 2017 and 2018. The short film features workshop participants and their reflections on the process of creating scenarios as a way of exploring and shaping future changes in the region.

An outreach report documents the scenario work, presenting three scenarios developed by workshop participants and discusses how the scenarios might be used in the future to help bring about desirable outcomes.

Report and an executive summary:
http://digitool.library.mcgill.ca/R/-?func=dbin-jump-full&object_id=162490&silo_library=GEN01

Scenarios of Good Athropocenes in southern Africa
Researchers from South Africa including RA member Oonsie Biggs, collaborated with others to develop a set of positive visions for the future of southern Africa based on existing initiatives called "seeds".
Arctic Stewardship
Warming twice as fast as the global average, the Arctic is facing immediate challenges that are intensified by resource development and global socio-economic pressures.
Persistent mixed economies in Arctic Alaska
Using social network analysis, the authors show how mixed economies in two Arctic communities represent a persistent domain as opposed to representing a transitional state toward a market-based economy.
Show more
RA Young Scholar makes the top 30 under 30 for sustainability leadership
Marianne Falardeau-Côté, a PhD student at McGill University in Montreal Canada and a Resilience Alliance Young Scholar has been selected as one of Canada's Top 30 leaders under 30 in sustainability in the magazine Corporate Knights (Globe & Mail).
Loss of key households and cultural ties linked to sharing may impact communities more than resource depletion
A recently published paper in PNAS by Jacopo Baggio and colleagues, uses multiplex social ecological network analysis to analyze complex community dynamics in small indigenous communities in Arctic Alaska.
The Arctic is changing faster than ever - Arctic Resilience Report launched Nov. 25
The first comprehensive synthesis and assessment of resilience in the Arctic, written by a team of international researchers.
Arctic Basecamp Davos 2017
A group of leading scientists set up an Arctic basecamp at this year's World Economic Forum to make sure the world's business leaders heard the message "What happens in the Arctic doesn't stay in the Arctic".
Navigating the New Arctic
Navigating the new Arctic is a series of NSF funded workshops led by Craig Allen, Hannah Birge and Martha Shulski. The first meeting was held March 13-15, 2018 in Fairbanks Alaska.
Comparing 23 participatory scenario studies
A cross case comparison of 23 scenarios projects has been published in E&S as part of the PECS special feature. 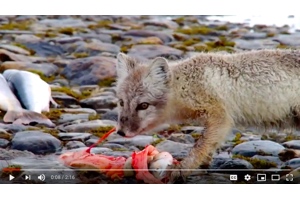